Pile-woven or knotted rugs are created by knots. Most handmade rugs with the exception of kelims are woven by tying knots on the warp strands. The type of knot used in weaving and knot density are discussed below.

There are different methods by which knots are created. The two predominant types of knots are asymmetrical and symmetrical. There are other kinds of knots as well such as jufti and Tibetan. However, they are not as frequently used. 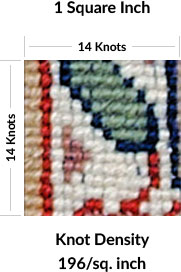 Knot density refers to the number of knots per square inch or square decimeter in a handmade rug. Knot density is measured in the imperial system in square inch and in the metric system in square decimeter. Every decimeter is equal to 10 centimeters and approximately 4 inches. Knot density is measured by counting the number of knots per linear inch or decimeter along the warp and weft (visible on the backside of the rug) and multiplying the two numbers. Since usually the two numbers are the same, one number can simply be squared.

Knot density could be a factor in the value of a rug, but this is not always true. In nomadic and some village items, knot density is usually not a factor. It is not a factor for collectors of these rugs either because nomadic and village rugs are judged by different standards than workshop rugs. Nomads and village groups do not have the same sophisticated tools as other city weaving groups. Their items are valued by the fact that their designs are created from memory, their dyes and materials are provided from the nature around them, and most importantly the weavers' way of life is expressed in them. These rugs generally have a knot density of between 25 to 100 knots per square inch. Rugs with higher knot density take a longer time to make, and since nomads migrate as the seasons change, if their rugs are not finished in time for migration, they will have to carry the looms with them. Therefore, their rugs tend to have a lower knot density than workshop area rugs. The value of these rugs lies in their heritage and simplicity. They have artistic value.

Knot density is a factor, among many other factors, in the value of workshop rugs or in other words city rugs. Since workshops have more sophisticated tools (though of varying degrees of sophistication) and follow cartoons (drawings on squared paper) for their designs, precision becomes important. Knot density, although irrelevant in durability of the rug, becomes important for creating intricate curvilinear designs because the higher the knot density, the more detailed the design can be. Workshop rugs can have a knot density of between 100 to over 1000 knots per square inch. Rugs of over 1000 knots per square inch are very rare and most likely very expensive. These rugs are generally pure silk with silk foundation because with silk foundation more knots can be tied. With cotton or wool because the strands are thicker, it would be difficult to tie this many knots in one square inch.

All handmade rugs are functional and exceptional works of art created with great patience. Every single knot is tied by hand. A rug can consist of 25 to over 1,000 knots per square inch. A skillful weaver is able to tie a knot in about ten seconds, meaning 6 knots per minute or 360 knots per hour. That means it would take a skillful weaver 6,480 hours to weave a 9x12-foot rug with a density of 150 knots per square inch. If we divide this number by 8-hour working days, that means it would take one weaver 810 days (approximately two and a half years) to weave such a rug. A rug as large as a 9x12 is usually woven by two or three weavers, so the above time can be reduced by half or third. Imagine if the knot density is even higher!