The lifestyle of each weaver is influenced by his or her geographic surroundings and local customs, and this has a big impact on the handmade area rugs that they produce. For example, tribal weavers such as the Turkomans and Baluchis produce distinctive work, but city weavers who are found in China, India and Pakistan alter their style to meet specific demands from the Western market.

Turkoman handmade area rugs are distinctive because they are always made with 100 percent pure wool, and the weavers utilize geometric shapes. Additionally, the majority of Turkoman rugs feature a red or reddish-brown background. The rugs that are produced by Turkoman tribes are often referred to as Turkmen rugs, and they were historically known as Bukhara or Afghan rugs.

Turkoman weavers are nomadic, and they live in Afghanistan, Turkmenistan, northeastern Iran and Uzbekistan. There are many Turkoman tribes in these countries, including the Ersari, Salor, Chodor, Saryk, Arabchi, Youmut and Tekke.

These handmade area rugs feature a unique octagonal motif that is called a gul. Each tribe has a gul that they were very protective of several centuries ago, but now all Turkoman weavers are allowed to freely use any gul in their rugs. The Turkomans also use the hatchli design when they make Ensi rugs. 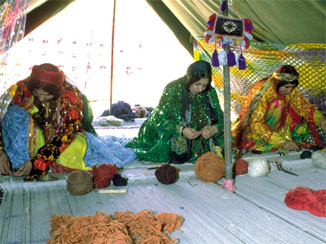 The Baluchi tribes trace their origins back to at least the 10th century, and they can currently be found in Iran, Pakistan and Afghanistan. The majority of their population lives and weaves in the Baluchistan territory, and making rugs is one of their primary sources of income.

The women of the Baluchi tribe do most of the weaving, and their families live in either tent-like structures or actual tents. In addition to making small handmade area rugs, the Baluchi tribes also create saddlebags, pillow covers, salt bags, sofrehs and ru-korsi. The sofreh is a cloth that is used as a placemat for food, and the ru-korsi is a tablecloth for tables that have a heater underneath them.

The majority of Baluchi created handmade area rugs are geometric. These tribes are well known for their tree-of-life prayer rug. Baluchi rugs are marketed under several different names, including Herat Baluchi and Mashad. It is also common for the specific tribe's name to be utilized for marketing purposes such as the village of Chichaksu, Nishapur, Koudani and Haft Bolah, Mushwani and Dokhtar-e-Ghazi.

Special rugs require special service. Whether you need rug repairing, cleaning, washing, or refurbishing Medallion can help. In addition to free pick-up and delivery, Medallion can help assess how to best preserve, clean, or wash your rug depending on the construction, age, materials, and condition. Rug cleaning and care requires more refinement and experience with age. Let Medallion be your secret to keeping your rug pristinely beautiful for generations.